The post-Thanksgiving theme of whipsaw trading on Wall Street continued on Wednesday (say that three times fast!), to say the least.

The Dow Jones Industrial Average (INDU) gave up a more than 500-point lead to end the day more than 400 points LOWER. Talk about a wide wingspan…

In a nutshell, the Fed and the latest Covid-19 headlines were a real buzzkill, and a post-earnings nosedive from Salesforce.com (CRM) didn’t do bulls any favors.

More specifically, the upward momentum stalled as Fed Chair Jerome Powell said the central bank will consider “wrapping up the taper of our asset purchases … perhaps a few months sooner” than previously expected.

The real gut-punch came courtesy of the Centers for Disease Control (CDC), though, which confirmed the first case of the Omicron variant inside the U.S., sending stocks into a tailspin.

As we’ve been discussing lately, though, there are ways to make money trading in ANY environment, especially if you trade against the herd (we know where the herd ends up!) and if you’re adept in speculating with options.

So today, let’s continue our theme of options education with a lesson on Open Interest (OI)… and the vaccine maker once again in option bulls’ crosshairs — and the chart level they’re zeroing in on.

Pfizer Pushes Its Way Onto the Highest OI List

Pfizer (PFE) has been on our radar already this week, as the vaccine maker moves on all the Omicron noise.

The drugmaker has certainly moved against the herd, too.

When the rest of the market took a spill during the short Black Friday session, PFE shares gapped HIGHER. And then yesterday, while most of its blue-chip peers were swimming in red ink, take a look at Pfizer stock’s big ol’ green candle: 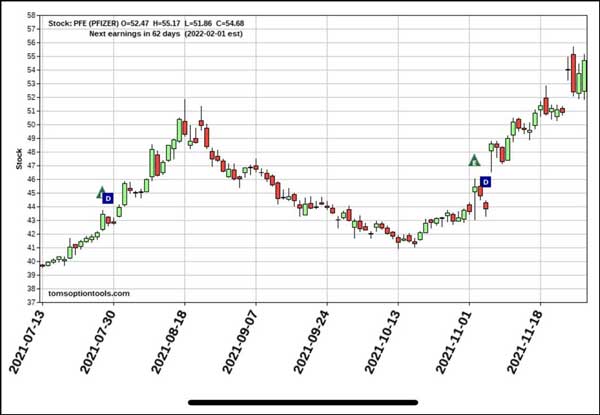 PFE chart courtesy of the TG Suite Morning Report tool
We also discussed earlier this week the interest in PFE’s $55-strike call expiring Jan. 21, 2022, which made the High Option Volume list on Monday.

Buyers of the call expect the pharma stock to climb above its recent peak and ascend to new heights north of the $55 level within the next several weeks.

And now, the interest in bullish Pfizer bets is further evident in today’s Power Profit Trades watchlist, courtesy of the Highest Option Open Interest list from the Morning Report. 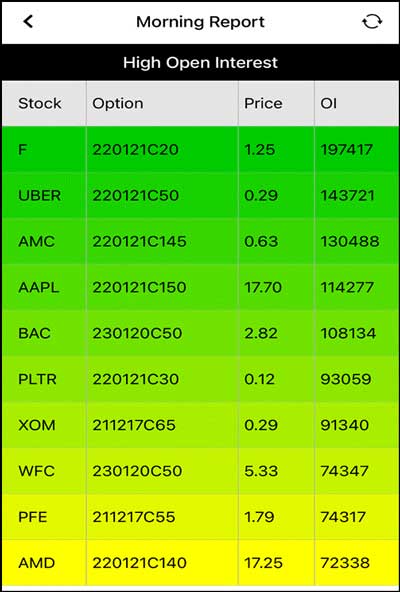 Open interest is the amount of currently open call or put options at a particular strike. In PFE’s case, you can see that more than 74,000 contracts are open at that January $55 call.

These contracts were either bought or sold to open at some point, and haven’t yet been exercised or closed out. And because LEAPS (Long-term Equity AnticiPation Securities) expire in January and can be accumulated years ahead of time, it’s not too surprising to find most of the options on today’s Watchlist expire in either January 2022 or 2023.

Still, as of Wednesday, when I was diving into my Morning Report tools during my 9:30 a.m. LIVE session, PFE wasn’t on my Highest OI list… meaning the recent surge in popularity JUST landed that call option on our list. 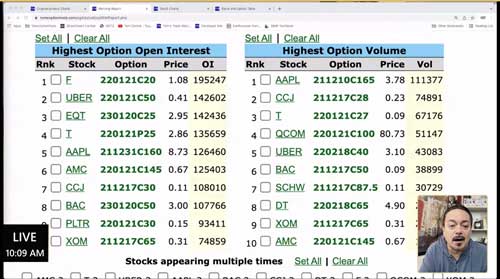 Reviewing my Morning Report lists on Wednesday
When we see high open interest, it tells us there is a lot of open activity around that option, so lots of traders are watching that level — which could make it that much more important on the charts.

That being said, the $55 level could remain in focus for PFE traders heading into the New Year…

That’s all for today — be careful out there and I’ll talk to you soon!