I have some big news for you…

That’s right, you can now trade the opening bell of every session with THIS GUY.

And while I know you all love the rest of Team Tom, like my buddies Jay and Mike, I’ll be the one in the room every day through the end of October.

After all, earnings season just kicked off — why should they get to have all the fun?

There isn’t much we love more than talking shop with like-minded traders like YOU, which is why you can catch us LIVE in the room at 10:30 a.m. ET TODAY.

And if that isn’t enough, I’ve recorded a special video update for you, where I go over:

I’ll outline a couple of those key points in today’s Power Profit Trades, and we’ll look at a few bank stocks with options at a bargain after earnings.

While I unfortunately didn’t get to this in yesterday’s video message, I said at the end that I plan to devote some time next week — likely Tuesday — to diving deeper into things like finding cheap options.

Until then, though, I’ve brought you the Morning Report’s Cheap IV tool. 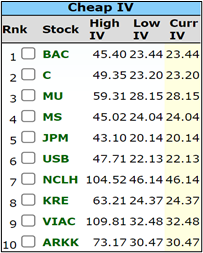 What does it mean when you hear an option is “cheap”?

Cheap IV means the current IV is at the low end of this 52-week range, meaning option premiums are relatively inexpensive at the moment — a ripe atmosphere for buying to open calls or puts.

My tool measures IV against its own 52-week range, as opposed to other barometers, which usually measure IV against a stock’s realized (or historical) volatility.

IV reflects how much a stock is expected to move over a certain time frame — say, the next 30-days.

Ahead of known volatility catalysts like earnings, the anticipation builds and option prices tend to get higher with IV.

Sometimes traders will capitalize on this, buying options with cheap IV and then riding a pre-earnings IV wave higher, ultimately selling to close the contracts for a profit.

However, after the stock reacts to earnings, the option prices often drop dramatically — kind of like driving a new car off the lot; its value depreciates immediately.

The top slots, though, belonged to Bank of America’s (BAC) and Citigroup (C). 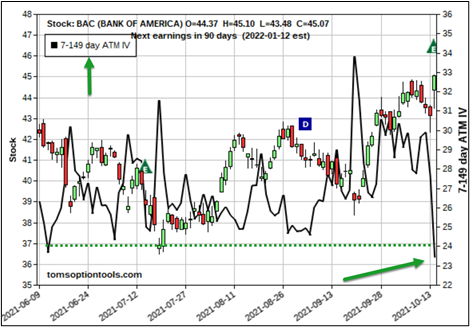 I talk more about some UP-coming earnings in yesterday’s video update, though — not to mention update you on my favorite crypto plays we discussed not long ago — so make sure you check it out right here! 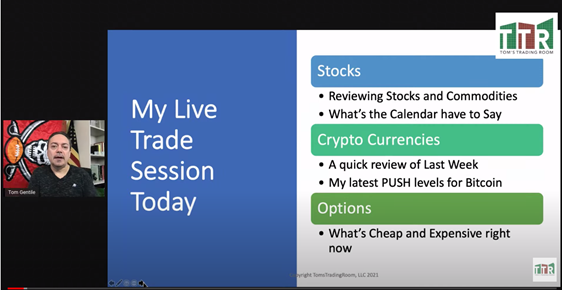 And then hop in the room at 10:30 a.m. ET, because it’s time to send this week off in style with another LIVE lesson from Team Tom.