Yesterday I dove into my general outlook for stocks at the moment, as well as a handful of sectors and exchange-traded funds (ETFs) that I consider value plays.

In fact, my Money Calendar data recently pointed to a bullish trading opportunity around the Invesco QQQ Trust (QQQ) in the near term, and we dissected a few potential ways the seasonality trend could be played.

For those of you who don’t know, the QQQ is essentially a microcosm of the tech sector, and is based on the Nasdaq-100 Index (NDX).

It includes some of the biggest names on Wall Street, offering traders exposure to stocks like Tesla (TSLA) and Advanced Micro Devices (AMD) in one fell swoop, without breaking the bank.

Today, though, I want to pry open the doors of the QQQ and dive into five of its most famous associates: the so-called “FAANG” stocks.

If you’ve been hiding under a rock, FAANG is an acronym for Facebook, Amazon, Apple, Netflix, and Google…

However, only two look like SUPER long-term buys, while another FAANG stock could be ripe for a premium-selling strategy.

You can catch the video version of my analysis around the 15-minute marker here, but I’m going to outline it all for you right here, right now.

Meta Platforms (FB) – formerly known as Facebook – recently made an “inverse hammer” candlestick pattern on the charts, which I typically view as a bullish signal. 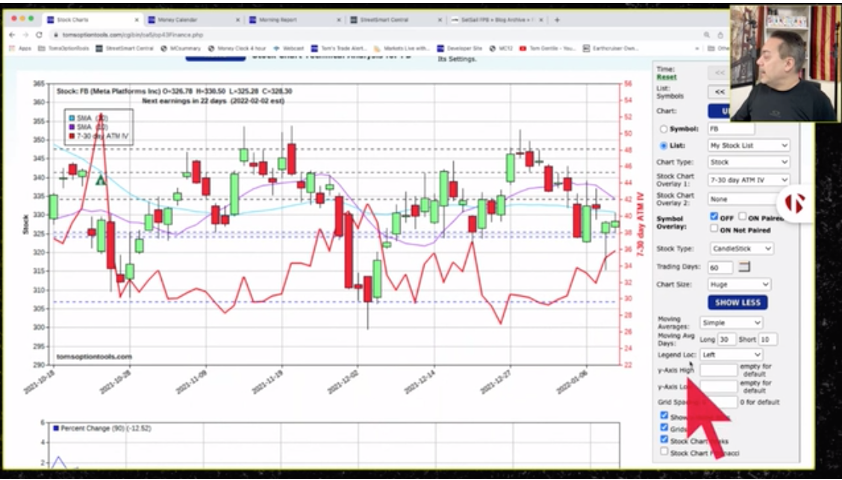 FB made an inverse hammer earlier this week

I currently view FB as a super long-term buy, and not just because of the charts.

I don’t think the burgeoning Metaverse – and the crazy money inside – has been fully priced into Meta Platforms yet.

I mean, I saw recently that a DIGITAL property next-door to Snoop Dogg fetched about $450,000!

Another person paid about $4 MILLION for a private DIGITAL island, people. You can’t even get a real suntan! That’s waaaay more than I paid for my own slice of REAL-LIFE, TANGIBLE Heaven in New Zealand.

I could’ve never predicted how much money would flow into this virtual world, but my theory is – perhaps people are stir-crazy and getting sick of being cooped up.

The pandemic has flip-flopped many people’s lives and routines, and it could be they’re choosing to invest in their virtual lives because they can’t live their real ones. (Wow, that got deep, didn’t it?)

Moving on… Apple (AAPL) also had its own version of a hammer earlier this week, though I’m not nearly as excited about that one as FB. 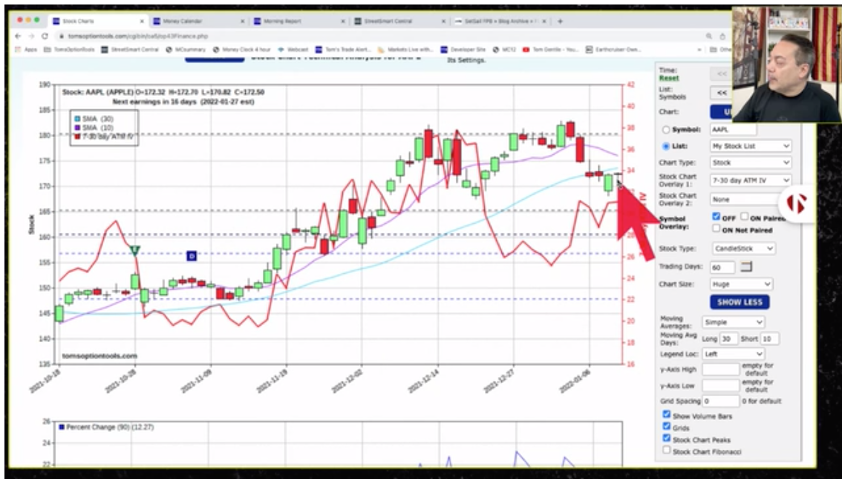 AAPL made its own hammer earlier this week

But another FAANG stock I consider a value play right now is Amazon.com (AMZN).

Yes, the pandemic has caused some supply-chain issues… But it doesn’t seem to be bothering Amazon too much.

I believe AMZN shares will be higher at the end of the year. 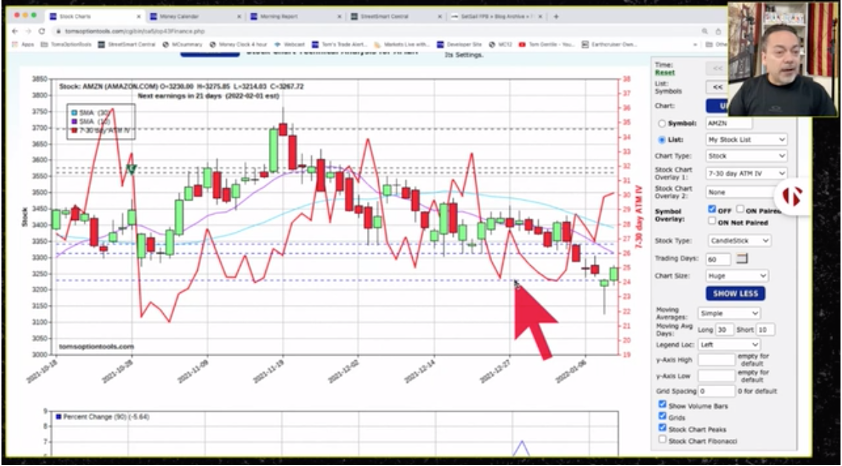 I discuss AMZN around the 20-minute marker

The FAANG stock I am concerned about is Netflix (NFLX), and I’ll tell you why in one word: Competition.

I mean, how many streaming subscriptions do YOU have? Because if your house is like the Gentile house, it’s a LOT.

I can name a handful off the top of my head – fellow FAANG names Amazon and Apple have popular streaming services of their own, not to mention Hulu, Disney+, Sling, Paramount… And don’t forget the cable subscriptions you still pay!

But what stuck out to me on NFLX’s chart was its short-term implied volatility (IV), represented by the solid red line. This line rising means NFLX option prices are growing expensive. 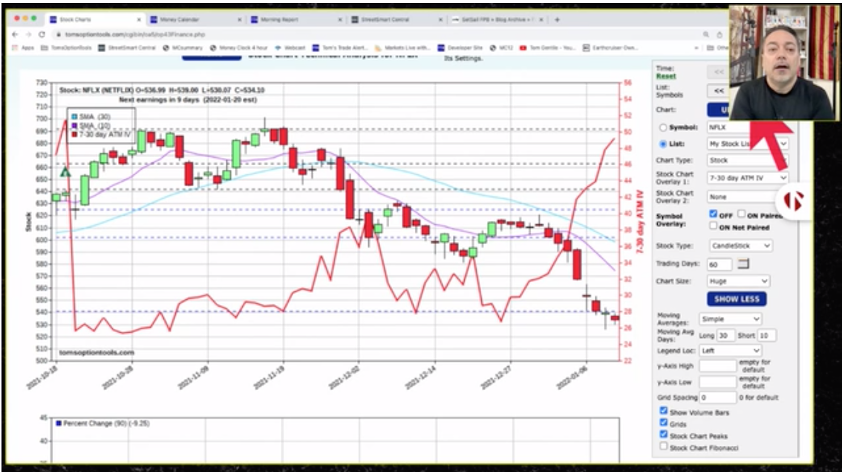 In fact, NFLX premiums are so hot that it landed on the Expensive IV report from the Morning Report tool inside the TG Suite app – better known as today’s Power Profit Trades Watchlist.

This data is updated after the closing bell each session, and compares current IV against a set of near-the-money options over the last year. “Expensive IV” means the current IV is at the high end of this 52-week range, meaning option premiums are running hotter than normal – a ripe atmosphere for selling to open options. 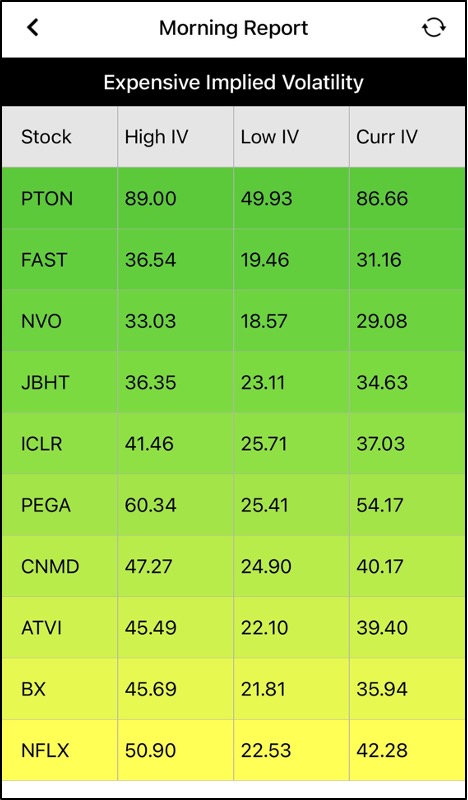 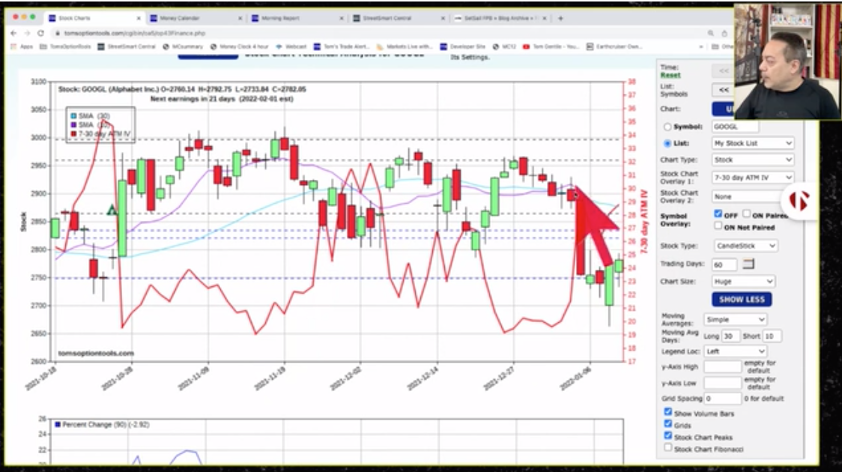 GOOGL IV is also near a high point

You can see that GOOGL IV is also running quite hot, and I’m glad that I recently sold option premium on the stock.

By selling to open options instead of buying them outright, you receive a net credit out of the gate – and you can pocket most or all of it as long as the option doesn’t move into the money by expiration. Hence, it behooves sellers to strike when the iron is hot – and getting hotter.

That’s all for now, Power Profit Traders, but I’ll be back tomorrow to break down my 7 Steps to Trading Success in 2022 (and beyond).