As many of you know, I’m all about the LIVE trading sessions, as I feel this is the best way to teach my strategies and interact with like-minded traders like you.

So if you missed my full hour of LIVE trading yesterday, don’t worry — Team Tom has queued up another 60 minutes of patterns and prices and pretty pictures for you at 10:30 a.m. ET today, right here!

It’s especially important to absorb all the trading knowledge you can right now, because if you haven’t noticed, the market has been a bit skittish lately… and I don’t expect that to die down too soon.

As much as my Money Morning LIVE colleague Kenny “The Warlock” Glick is geared up to trade the volatility that comes along with earnings season (he’ll be going over his strategy in-depth at 9:30 a.m. ET tomorrow), it can be scary out there if you aren’t prepared.

After all, look what happened in Monday’s session — stocks were comfortably higher to start the day, only to roll over and end near session lows. I’m sure plenty of the new traders out there (lured to the markets by the GameStop Phenomenon of 2021, perhaps) got taken for a ride on the turn.

So today, I’ll explain what I think may have been behind yesterday’s reversal, and where short-term option bears are betting on speed bumps for two FAANG stocks before earnings.

Before we dive into today’s Power Profit Trades Watchlist, let me offer my two cents on Monday’s dip.

The markets found a bit of a bottom last week, in the sense they stopped pulling back and bounced for two or three days.

While it looked like the late-week momentum was going to continue early Monday, the Dow ultimately lost 250 points to start the week, while the S&P 500 Index and Nasdaq Composite dropped 0.7% and 0.6%, respectively.

However, this could just be what’s known as filling the upside gap.

In other words, following the bounce last week, folks could be taking some short-term profits off the table before big banks kick off earnings later this week.

But while gaps up often get filled to the downside, it’s also not uncommon to start seeing some buying kick in when the technical situation resolves.

That said, Monday’s gap inspired me to hunt the Unusually High Put Volume list from the Morning Report, to see where option bears are looking.

The stocks on this list got there because the underlying put options — not necessarily the stock itself — saw above-average activity during the last session, indicating a bearish bias.

See, by buying a put to open — and we can assume a lot of the puts on our Watchlist were, in fact, newly purchased — the traders expect the shares to move below the strike before the option expires.

And if they aren’t betting on a drop, they’re likely hedging against one, meaning they’re bullish on the underlying stock, but marrying their positions with puts as a form of “options insurance.” 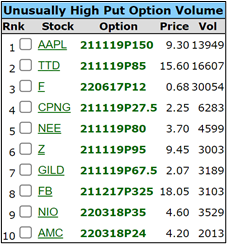 The top option on our Watchlist is the Apple (AAPL) $150-strike put expiring Nov. 19.

This option encompasses Apple’s own earnings release on Thursday, Oct. 28, so it could be the buyers expect AAPL stock to have a negative earnings reaction.

AAPL shares haven’t been above $150 since early September, and closed yesterday at $142.81, so those $150-strike puts are already about 7 points in the money (ITM). “Vanilla” buyers are hoping they move deeper ITM before options expiration.

In addition, another so-called “FAANG stock” — an acronym for Facebook, Apple, Amazon, Netflix, and Google — made the Watchlist: Facebook (FB).

Facebook reports earnings after the close on Oct. 25, and yesterday the stock’s $325-strike put expiring Dec. 17 was unusually active.

FB shares closed Monday right around $325, meaning the puts were at the money (ATM) at the time.

The puts went for around $18.05, though, per our Watchlist above, which mostly consists of implied volatility (IV) and plenty of time value.

IV tends to inflate before known catalysts like earnings, and people are willing to pay up for those premiums. After Facebook reports, the price of its ATM options should dwindle, in what’s known as a “volatility crush.”

That’s all for now, but be sure to hop in the room and watch Team Tom dole out some critical trading lessons at 10:30 a.m. ET today!