I’ve found a pattern in the market’s drastic movement these past few weeks.

It seems we’re in a constant downtrend. Markets will fall, sometimes as low as their limit-down price, just as the Dow did before the market opened Monday morning.

Then, with any good news, we see a violent pop – like the Dow’s 1% jump after the Federal Reserve unveiled unlimited asset purchases…

Only to resume the freefall again, shortly after.

Now, I expect this trend to continue. But it’s not the only pattern making itself clear right now…

In my latest update, we took a look at these patterns – and how we can use them both to save money and profit off the continued volatility.

You can check it all out right here…

I've been trading for over 30 years now, and sometimes, it feels like I've seen everything. But this month has been a serious reality check. For as long as I've been alive, I've never seen anything like this. All major indices have hit new...

The phrase no one can predict the future has never rung truer than it does right now.

Back when I first heard the word “coronavirus” in January, I could never have predicted it would lead to stocked fridges and toilet paper sell-outs.

See, in the past month alone, restaurants around the country have closed. Schools have moved entirely to online learning. The markets have tanked 30%. And I’m willing to bet the majority of you are reading this from your couch, back aching from leaning over a laptop all day.

Businesses and individuals everywhere are losing money. And when you’re watching cash flow out of your bank account, it’s hard not to panic.

But you don’t have to feel trapped in the market meltdown. There are three things you can do right now:

Easier said than done, I know. But that’s exactly why I’m here.

I’m going to show you how to employ these three steps starting today.

Yesterday was a day that we, as traders, will never forget.

After hitting its 7% limit on the open, the market continued plunging all day long, the Dow closing 3,000 points down for its worst single-day drop in history.

So today, I want to dive into that downward movement and go through every corner of this market. I’m talking the Dow, bonds, the U.S. dollar, and oil.

But that’s not all.

There are opportunities for short-term traders in this market – and I’m going to show you exactly what they are.

The coronavirus has become a massive heavyweight on stocks, officially dragging the Dow Jones into its first bear market in 10 years on Wednesday.

But not every stock is suffering under the pandemic’s weight.

With more people choosing to stay home during the days and nights, stocks like Netflix, up 15% for the year, and Amazon, up 4%, continue to rise.

Streaming and delivery services, however, aren’t the only companies benefitting from the global unrest.

Healthcare has hit a stride as well.

In fact, an unexpected announcement from Vice President Mike Pence just laid out a fast track for one healthcare stock to shoot skyward, rising above the ashes of the falling stocks around it.

Here’s how you can cash in now…

On Monday, we saw a historical day in the markets due to the fact that oil futures were down a whopping 30%. This is the biggest plunge that we’ve seen in the U.S. since the Gulf War in 1991.

This was due to the price war that is happening between Saudi Arabia and Russia, and the even more bad news regarding the spread of the coronavirus.

The S&P 500 tripped a circuit breaker for the first time since 1997, which resulted in a 15-minute trading halt, and the Dow dropped a whopping 2,014 points.

It was enough to leave your head spinning… to say the least.

Today, I want to take some time and really dissect what’s going on in the markets right now.

This is setting up to be a great educational opportunity when it comes to options trading and how to protect your portfolio.

Find out what I have to say here… 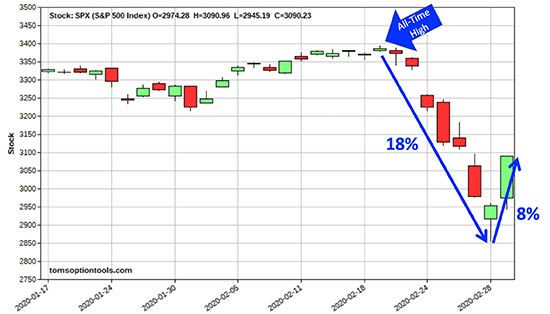 
Feels like the fast up-and-downs of a rollercoaster, right? The kind that makes your stomach squirm. And the ride is far from over…

Last week was the market’s worst since the 2008 financial crisis – but yesterday, a bounce returned stocks to the green.

That doesn’t mean the worst is over, however. We can’t call a bottom quite yet…

The coronavirus is still spreading. In fact, a case was just confirmed in my own county at home in Florida.

Volatility isn’t over – it’s here to stay, and it could get even worse.

So, I’m taking a deep dive into this market today…

I won’t just tell you how to protect your portfolio. I’ll show you 10 of the market’s lowest-risk trades to play amidst the market’s volatility.